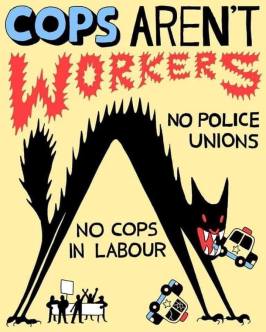 The ultimate power of the labor movement lies in solidarity. Together, working people are strong. So what can the movement do in this moment of national struggle against racism and police violence? The obvious answer is to deny the power of solidarity to police unions, which function as barriers to the very reforms that Americans are now fighting for. The time has come to put police unions on a raft and set them adrift. Perhaps they can reapply for solidarity if they ever stop abusing the rest of us.

It’s time to kick police unions out of the labor movement. They aren’t allies

Police unions have long had a singular—and divisive—place in American labor. What is different at this fraught moment, however, is that these unions, long considered untouchable, due to their extraordinary power on the streets and among politicians, face a potential reckoning, as their conduct roils not just one city but the entire nation. Since the nineteen-sixties, when police unions first became like traditional unions and won the right to bargain collectively, they have had a controversial history. And recent studies suggest that their political and bargaining power has enabled them to win disciplinary systems so lax that they have helped increase police abuses in the United States.

How Police Unions Enable and Conceal Abuses of Power

Police unions have always been outliers among organized labor, and there are many reasons why the Industrial Workers of the World (IWW) union has long refused to allow cops (and prison guards) into its organization. For one thing, no other union members hold the legal ability to straight-up kill another human being while on the job. If an ironworker bashed someone’s head onto the concrete, or a retail worker shot someone in the back as they were running away, or a graduate student worker ground their knee into someone’s neck until they stopped breathing, there would be consequences. Actually, police unions themselves used to be illegal, because local governments worried about the consequences of allowing armed state agents to organize. And historically speaking, the police have been no friend to workers, whether officers were shooting at the families of coal miners during the Battle of Blair Mountain, crushing the ribs of immigrant garment workers during the Uprising of the 20,000, or teargassing working-class protesters in Minneapolis after police killed George Floyd.

Police Unions: What to Know and Why They Don’t Belong in the Labor Movement

After months of hand-wringing and re-imagining what mobilization will look like in times of social distancing, I’ve found myself suddenly compelled to venture outside, mask, gloves, and hand sanitizer in tow, to join the tens of thousands of people in the streets proclaiming Black Lives Matter!

I was moved to come outside and see that these protests were being led by mostly young people in high school and middle school. They were joined by the members of the community who had been most affected by over-policing. I also saw the usual progressive types from the Democratic Socialists and from nonprofits. I couldn’t help but notice the absence of organized labor in the streets.

We are living through a moment of reckoning. Some of our oldest institutions are being examined right now in mainstream discourse. These conversations are uncovering some ugly truths about white supremacist practices in policing, banking, and education. I don’t believe that organized labor is exempt from this reflection.

It’s Time to Make Black Lives Matter in Our Unions

One paramedic told RNZ he and his colleagues were already underpaid and penal rates, which were expected to be 25 percent on top of their hourly pay, they were falling further behind other health professionals.

“I’d be on about $65,000 a year after 20 years work – quite a number of my colleagues are on the minimum wage and those colleagues were with me at the coalface, facing danger, helping out the community and they’re paid the minimum wage which I think is disgusting.”

Another paramedic RNZ spoke to said it was incredibly disappointing, especially after a stressful few months dealing with the threat of COVID-19.

St John is being urged to front up on planned job cuts so staff are not left in limbo.

A union representing ambulance workers claims St John already can’t properly crew its ambulances and the cuts will only further endanger the public.

In a memo to all staff on Wednesday, St John chief executive Peter Bradley said it was forecasting a significant deficit in the next financial year, and its board wanted to save up to $30 million.

As Trinity Morehu sits in the back of the St John ambulance, her stress levels keep going up.

Her three-month-old baby, Zhyon, is wafting in and out of consciousness. The young mother is terrified and has no idea what she’s doing.

She has to rely on verbal directions how to watch her baby’s saturation levels and give him oxygen because the sole paramedic has to drive the ambulance.

Almost 12,000 people have signed a petition calling on the government to address a funding anomaly that sees registered nurses working in aged care earning, on average, around $10,000 less per year than their counterparts in public hospitals.

The New Zealand Aged Care Association (NZACA) launched the month-long campaign on June 5, inviting support for pay parity for aged care nurses by going to http://www.fairpay.org.nz, calling on Health Minister David Clark to provide funding that would enable the sector to match the salary packages paid by the DHBs.

Today, an independent review of Covid-19 clusters in aged care facilities found that the infections were introduced to the facilities by staff or visitors. It detailed how staff at some rest homes were operating in an “atmosphere of fear”, how they did not have a strong knowledge of epidemiology and how a single positive Covid-19 result could lead to heavy staff shortages.

There are about 300 vacancies for registered nurses at rest homes around the country.

Those positions require the same qualifications and skills as nurses working for District Health Boards (DHBs), but are paid significantly less.

Jones said understaffing remains the main priority for the sector.

“Basically the staffing levels in residential aged care are set by guidelines that came about in around 2005 and the acuity and level of care required in rest homes is so much higher than what it was then, it’s just mind-boggling that it hasn’t been reviewed since.

“It can be as bad as one caregiver to 10 funded residents, you can have one to 20, it’s two to 29 and one on call, and so as you can imagine with the high level of acuity that’s pretty impossible for workers to do a decent job.”